The political and persuasive significance of being intentionally hard to understand.

My field is language and literacy education: I study Tanzanian schools where Maasai pupils are taught in languages they don’t know well. My doctoral dissertation will necessarily include a lot of non-English words (notably Swahili and Maa). How should I quote my sources? I’ve seen different authors do different things: quote in translated English with the original in parentheses or a footnote; quote the original in text, in italics, and use parentheses for the translation; define key non-English words once and then continue using the original word throughout… What system will make it easiest for readers who can’t read these languages to understand my work? – Monica Shank

My usual advice in this column is prioritize the needs of your readers—to make your text easier for your target audience to understand, and thus make it more likely for them to remember, believe, and cite your work.

But, dear letter-writer, in your case, I contradict myself: I think you should make your research harder to understand — or harder, at least, for people who don’t speak Swahili or Maa. Experiment with making your readers feel what the Maasai pupils in your research feel when they go to school in languages in which they aren’t fluent. Privilege non-English words. Make your readers feel estranged from the text.

Why give such odd advice?  The answer is two-fold:

Given that English gleefully steals words from everywhere, italics on a non-English word in an English text are just a price tag on an item freshly shoplifted.

They allow us to differentiate between the speed of a cyclist and the Speed of a young Keanu Reeves. As Greg Younging wrote in Elements of Indigenous Style, a sentence like “the barista takes the customer’s order for café au lait” can be written in English without any italics because English has appropriated the Italian “barista” and the French “café au lait.” These terms are now common parlance in English, and italics are reserved for unfamiliar terms. Italics say, “this word is a strange one.”

When you publish, you enter particular conversations. You signal your participation in these conversations by citing particular scholars and theorists, by providing the appropriate amount of background for your readers, and by relating your argument to broader disciplinary or sociocultural concerns. You also signal your intended readership through your stylistic choices: by not italicizing the Maa words in your article, you’re showing that your research is, primarily, in conversation with the Maasai people.

Similarly, when you pace Swahili and Maa words in Roman rather than italic font, you signal that it is normal and expected to understand these words. You thus privilege Tanzanian knowledge and place a non-English-speaker reader at the centre of your intended audience, rather than at the margins. 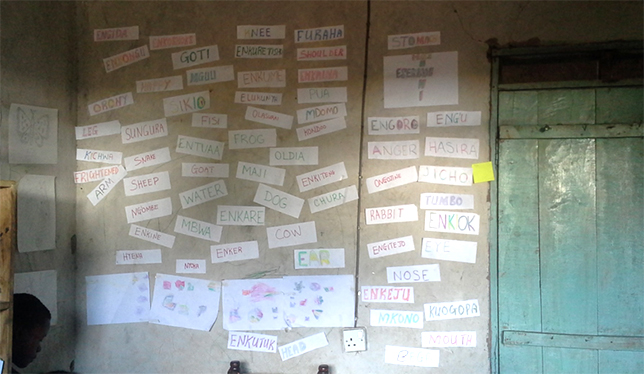 A multilingual word wall (including Maa, Swahili, and English) from a community learning centre in Tanzania. Photo courtesy of Monica Shank.

Those who translate written texts into English must choose whether or not to emphasize the foreignness of their source text. So, for example, a Spanish-to-English translator who encounters a reference to “martes trece”—literally, Tuesday the 13th — must decide whether to keep the literal translation, which means little to an English-language audience, or to opt for a translation that sacrifices literal fidelity in place of increased understanding. A translator who selects this second approach will thus render “martes trece” as Friday the 13th, so that the English-speaking audience understands that the day is an unlucky one.

Translation theorists back in the 1990s — notably Lawrence Venuti — showed that there’s a preference in Anglophone literary circles for this latter form of translation. Dr. Venuti linked these more fluent, less literal translations with colonialism, arguing that translating for the ease of the English-speaking reader — domesticating the text — is an act of appropriation that erases important differences between cultures.

Linguistic and cultural differences — and the associated power differentials — are, I suspect, at the core your research. I’d therefore encourage you to strongly consider the political significance of centering your argument on the preferences of your Anglophone audience.

Dear letter-writer, the students at the heart of your research spend their days in schools where their linguistic and cultural difference is always in the foreground.

When you publish in English-language journals, you will necessarily have readers whose primary language is not Swahili or Maa. What if you were able to make these readers feel just a small piece of what your Maasai students feel every day?

We know from Aristotle that persuasion can be developed through three rhetorical devices:

Unusually in academic writing, I’m suggesting that you integrate just a touch of this third rhetorical appeal by making your audience feel what it is like to be placed at the margins of discourse.

Borrowing from Dr. Venuti and the translation theorists, I’d encourage you to consider integrating a vignette, case study, or other illustration of your students’ context that translates from Maa or Swahili in a non-domesticating, highly literal way. Provide a short piece of text in English that follows the “Tuesday the 13th” mode of translation. Your discipline is Education, a field that allows for innovation in in journal article structures (unlike the strict IMRAD structure of other disciplines), so don’t be afraid to break the mold and try something unexpected in your writing: a glimpse of what it’s like to be a confused, estranged person, struggling to understand what’s happening, and knowing what it’s like to be placed in the margins of intellectual conversations.