The book review is dead

To make a humanities book review work for you, defy the conventional.

When I was in grad school, my supervisor said that I shouldn’t write book reviews for journals. Now that I’m on the TT, I’m hearing the same thing: book reviews don’t carry any professional weight. Yet I’m expected to include reviews of my own book in my tenure file, especially ones published in the big journals – which suggests that they are valuable. So, do book reviews matter? Should I volunteer to write one?

Book reviews proliferate in the humanities, so some people – journal editors, at least – must think they matter! If you can dedicate time to writing a book review without taking away from your own publications, you could do so, if you have a good reason. This good reason can be whatever you like:

There are lots of good reasons to avoid writing book reviews, and lots of advice-givers who will tell you not to spend your time on them (e.g. Kelsky, 2014). Those arguments have merit, especially in the neoliberal academy, in which value is determined by measurements of “impactful outputs.” If you’ve published more book reviews than peer-reviewed journal articles or book chapters, then your CV will look suspiciously unbalanced during your tenure review.

That said, though, the book review’s status as an uncounted publication provides you with a flexibility and freedom that sometimes isn’t found in pieces which must pass peer review. Let’s examine the conventions of the academic book review before considering ways in which being unconventional may work for you.

Book reviews can be written to a formula: a concise summary, a critical assessment or critique, and a recommendation to the reader that attests to the book’s credibility. There are any number of articles describing these conventions in detail (e.g. Brienza, 2015; Belcher, 2003). In 1,000 or so words, the book reviewer is meant to evaluate the contribution the book is making to the discipline, situate its arguments in a broad context and point to particular strengths or weaknesses of the book’s analyses, evidence, citation and the like. 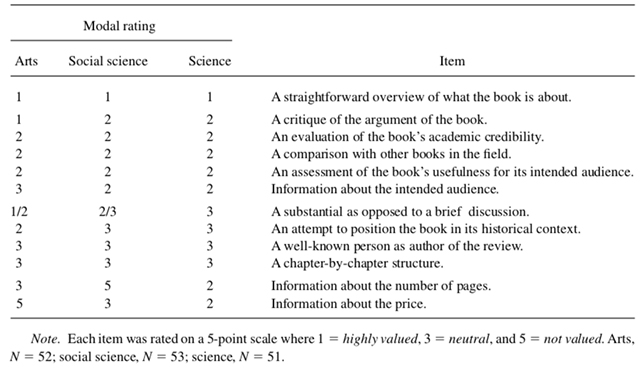 Dr. Hartley’s 2006 paper also identifies the top 10 reasons why researchers across the disciplines write book reviews. The number one reason? “I [was] asked to by the editor” (p. 1201). My hope is that you’ll be a bit more intentional with how you choose to spend your time and write book reviews only when you can do so without detriment to your peer-reviewed publications and have a good reason.

So what might an unconventional book review look like? The reviews editor of Educational Philosophy and Theory, Sean Sturm “welcome[s] experiments in the writing of book reviews that move beyond the customary formula and speak to this ethos of dialogue and openness” (2020, p. 3). Dr. Sturm lists — and cites — examples of what these unconventional reviews might do:

What excites me about Dr. Sturm’s examples is that their authors can be innovative in form, structure and content while still giving their readers what they want from a book review — that is, the content outlined in Dr. Hartley’s table, above. Dr. Sturm echoes Ronald Chenail’s argument (2010) that you can approach a book for review the same way you approach any other primary source or piece of evidence in your discipline — even drawing on your creativity, if you wish.

Zuccala & Leeuwen’s analysis suggests that book reviews do have the potential to be influential within a discipline, and that potential increases when you don’t do what most advice-givers say academic book reviews should do. If you want to write an average book review, follow the average guidance. If you want your book review to matter in your discipline — even if it’s in the wrong category on your CV — then you should write something unusual, something collaborative or original or expansive.

I agree with Rachel Toor, who argued that “[t]he monograph and book-review sausage factories are not, I think, the best use of our collective cerebral resources” (2012). Don’t take the sausage-factory approach – that form of book review is mere deadwood on your CV. Your readers will thank you — and maybe even cite you.